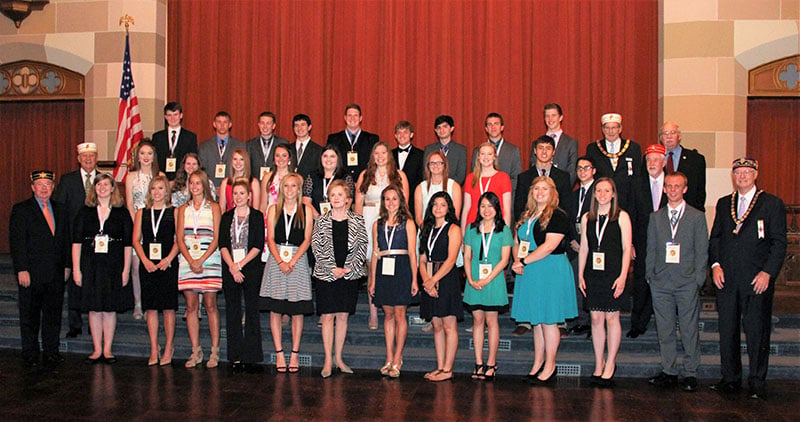 The Scottish Rite Fort Worth Valley, Foundation Grand Annual Banquet, was held on Saturday, June 4, 2016 and it was a very Grand Event. The banquet hall was filled to capacity, 34 tables for eight were nearly all filled as were the special guest and Scottish Rite Officer tables. The evening was a Grand Success for all, Scottish Rite Masons, Guest and Friends alike.

The Presentation of the Colors was by the Knights of Saint Andrew, Hon. Corey M. Harris, 32nd Degree, Honorable Knight.

Appropriately, the symbols of our great nation and state were ushered into the banquet hall by our Knights of Saint Andrew, Scottish Rite Masons and the raspy, sweet, throaty sound of Scottish Bagpipes. There is nothing as stirring to the hearts and minds of true American Patriots than hearing the bagpipes in the distance coming towards, and the sight of our Flag, the symbol of the great United States of America and the Flag of Texas traveling through our banquet hall.

Our Good friend and Brother the Hon. Paul A. Solomon, 32nd Degree KCCH, played the National Anthem and the Ill. John R. Allen, 33rd Degree lead the Pledge of Allegiance to the Flag of the United States of America and to the Flag of the State of Texas.

Our dinner was outstanding and was served in an outstanding manner by our caterer. We were served fillet of beef and as we say in Texas, “and all the fixins” with iced tea and coffee to drink.

The Fort Worth Scottish Rite Foundation Greetings were presented by Hon. B. Glen Whitley, 32nd Degree.

What a great privilege to be a part of the Fort Worth Scottish Rite and to participate in the giving of scholarships to outstanding, deserving and excited young folk who are anticipating reaching high goals in life.

As we were privileged to dine and talk with the scholarship recipients during dinner we could clearly see the excitement in the faces of the young men and women as they were receiving their first scholarship following High School Graduation.

We reveled in the smiles and laughter of the Parents, Grandparents and Friends who accompanied the young men and women. We clearly could see the thankfulness of the families for the scholarships and could feel the hope they had for their young students.

We could see the sparkle and smile when we asked the young folk what their plans for the future were and what their chosen education would be. We reminisced what it was like 20, 30, 40, or 50 or more years past when we may have received a scholarship and or were contemplating our own education and life plans. Well done to the young scholarship recipients …

What a blessing it was to be a part of giving back and watching others, especially young men and women beginning their lives with excitement, hope and courage.

Ill. H. Finlay Watkins, 33rd Degree provided a background overview of the Anson Jones award and an acknowledgement of past recipients and Ill. Robert J. Glasgow, 33rd Degree, provided an appropriate, laudatory introduction of the Honorable Kay Granger, 12th District Congresswoman, for the great State of Texas, as our 2016 Anson Jones recipient.

Honorable Kay Granger presented all with a “talk” that was patriotically challenging and important. Congresswoman Granger is woman of great stature both personally and professionally; she is a “Mom”, a Grandmother, a member of the United States Congress and an American Patriot. She is a woman to be admired and saluted for her service to the State of Texas and to our great United States of America. Her rousing words and challenge to support our nation and to go forth with strength and conviction was heart felt and deeply appreciated by all. The Honorable Kay Granger is a very worthy recipient of the 2016 Anson Jones Award. We thank Congresswoman Granger for her past and continuing service.

The Ill. M. Douglas Adkins, 33rd Degree, SGIG was the closing speaker of the Grand Annual Banquet for 2016. He spoke of American heritage, responsibility of citizenship and provided challenges for the future. In his presentation, he reminded us of the need for having purpose, value and moral convictions. His words resonated with all present as he reminded us in ”plain talk”, the need for patriotic, high morals and values to support our nation. He challenged the young folk to be prepared and diligent and to educate themselves as they are the leaders of tomorrow and theirs is a heavy responsibility.