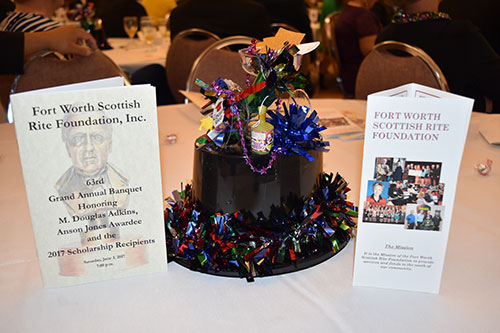 The night started with a reception in the Asylum on the 4th floor for attendees to enjoy a light snack and mingle. Moving to the Ball Room, the banquet opened with a welcome from the Ill. Ken Curry and invocation by the Hon. Hal Ray. The Knights of Saint Andrew presented the colors, and a short history of the foundation was given by the Ill. Danny Gilbert.

After a delicious dinner, the real main courses of the evening began, starting with recognition of the Scholarship recipients in attendance. As the students were announced and asked to come forward, they were presented with an award certificate and etched crystal with the 32nd Degree Eagle.

This year’s $15,000 gift to the Texas Scottish Rite Hospital for Children from the Foundation was presented by the Ill. Michael Motley to representatives from the hospital.

Building to the presentation of the Anson Jones Award, the Ill. H. Finlay Watkins regaled the audience with the historical significance of Bro. Anson Jones and his importance to Texas Freemasonry. Past winners of the award were celebrated, and the Ill. M. Douglas Adkins was acknowledged as this year’s honoree.

In addition to the award, a special gift of a customized metal sign was given to Ill. Adkins to be hung at his ranch. The podium was then given to him, who spoke at length about the challenges facing our country today, and the promise of the young students honored at the banquet.

M. W. Jerry Kirby, Grand Master of Masons in Texas, was the final speaker of the night and shared some remarks and valuable advice, speaking from his experience as not only the Grand Master, but also as a life-long educator. The evening then concluded with a benediction from the Hon. Michael A. Haverland.

As Scottish Rite Masons, we should be proud of the positive impact of the Grand Annual Banquet upon the community. Not only does it demonstrate the Masonic virtue of Charity by contributing to the higher education of worthy students and to the care of children in need of specialized medical attention, but it shines a light on what Masons do and have to offer.

Speaking to a parent of one of the recipients, she remarked how the event was special to her and her son. While her son had won several different scholarships, this was their favorite because of the fanfare with which it was presented. None of the other charities had a similar event. Not only did it impress upon them how we give financially, but also how Masons give of themselves.

To find out more about the Scottish Rite Foundation and how to contribute, please contact the Fort Worth Valley’s office at 817-335-6004.

“Masonry aims at the promotion of morality and higher living by the cultivation of the social side of man, the rousing in him of the instincts of charity and love of his kind. It rests surely on the foundation of the brotherhood of man and the fatherhood of God.” – Bro. William Howard Taft