Fort Worth Scottish Rite ROTC and Junior ROTC Awards – May 2016 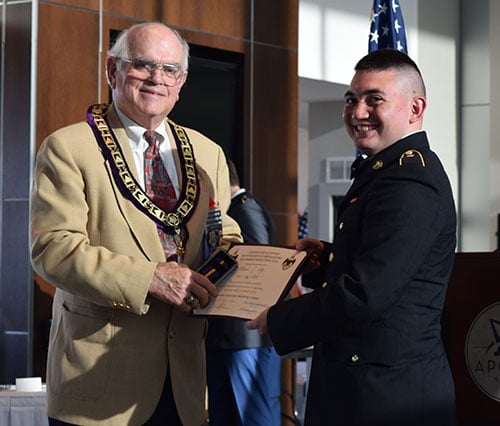 Each year in May, the Fort Worth Scottish Rite participates in the Reserve Officer Training Corp (ROTC) Awards Program for the special young Men and Women who have performed in an outstanding manner as members of the ROTC and Junior ROTC.

The candidates for the awards are judged by their peers and ROTC Leadership in the areas of academics, military protocol, military bearing and personal leadership attributes.

The awards are prestigious and carry special importance to the recipients and their families. Many of those receiving the awards have chosen or may choose a career in military service following graduation from high school or after completing their college or university education. These young folk, award recipients and all other ROTC and Junior ROTC members alike, are young patriots who are beginning a life of service to our great country.

The ROTC recipients and ROTC members train as and represent the United States Army, Navy and Airforce. Following an appropriate completion of the ROTC programs the members may also choose to join the United States Marine Corp, Coast Guard, or other affiliated military service groups.

Our Brother Ricky Cliatt, 32 Degree, is the ROTC Chairman for 2016. Ricky is a Masonic “champion” for young people and has a great heart for the ROTC programs. Ricky proudly states his love of country and demonstrates his dedication to our Scottish Rite Valley. “Well Done Ricky”, and a huge “Thank You” to the following team of volunteers who so professionally, carried out a portion of our stated purpose as Scottish Rite Masons:

The Fort Worth Scottish Rite Valley and its members congratulate and are proud of these young award recipients and all other ROTC and Junior ROTC members who are academically and discipline strong and who stand proudly as young American Patriots.