Fort Worth Scottish Rite ROTC and Junior ROTC awards May 2017 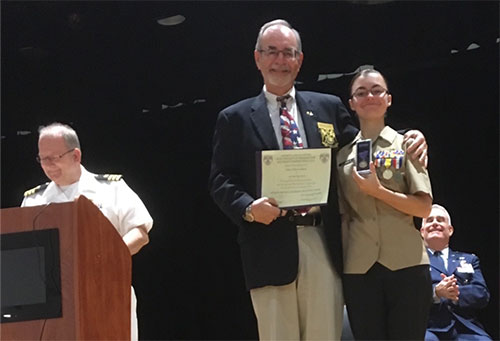 May 2017 has come and gone and June is upon us again. The Fort Worth Scottish Rite Valley has completed its presentation of special honors to our outstanding young American Patriots.

The Fort Worth Scottish Rite takes great pleasure in presenting special awards each year to deserving and outstanding Reserve Officer Training Corps (ROTC) and Junior ROTC (JROTC) recipients each year, and 2017 in no exception.

It is very special to see so many young college and high school scholars and disciplined young men and women who have a desire to become members of such a prestigious organization as the ROTC and JROTC. In a time when we need disciplined and educated leaders for the future, the ROTC and JROTC leaders and personnel work diligently in our colleges and independent school systems to begin the processes of developing energetic and capable young leaders. We recognize the great job the ROTC and JROTC leadership is doing and the Fort Worth Scottish Rite salutes them for their tireless and capable leadership.

The candidates for the awards are judged by their peers and the ROTC leadership in the areas of academics, military protocol, military bearing and personal leadership attributes.

There were six ROTC awards presented to outstanding college and university recipients, and 43 Junior ROTC awards to high school students. The awards are very prestigious and carry high expectations for the recipients and have special significance for the parents of the recipients.

Many of the recipients have declared their intent to join the United States Military services, (Army, Navy, Air Force, Marines and or Coast Guard) following high school while others plan to attend college or universities and continue their participation in ROTC.

Our 2017 ROTC and JROTC awards program was led by Brother Ricky Cliatt, 32nd Degree. This is Ricky’s third year as Program Chairman and he and his volunteers should receive outstanding recognition for the effort and professional manner they carried out their presentation duties.

The following Fort Worth Scottish Rite Masons comprise a great team of ROTC and JROTC presentation volunteers, many or most of whom are United States Military Veterans:

The Fort Worth Scottish Rite is very proud to have a small part in recognizing these wonderful, disciplined young scholars and recipients of the ROTC and JROTC awards. They represent a part of the future and their achievements have not only identified them as young American Patriots, but as high achievers and the leaders of tomorrow.