Welcome to 2017 and the new Fort Worth Valley, Scottish Rite Year of Possibilities

Home Welcome to 2017 and the new Fort Worth Valley, Scottish Rite Year of Possibilities 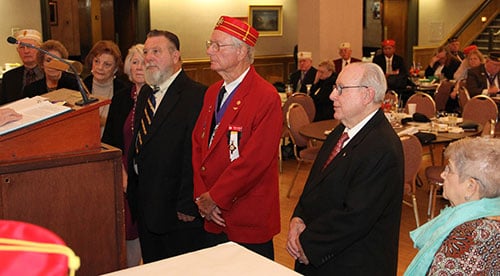 Here we are again in March, the month of Fellowship, Brotherhood, Regalia, Drama and great possibilities for all Scottish Rite Masons.

As we begin and continue in this New Year, 2017, with our Spring Reunion, we pause to recall several months of past Stated Meetings, great dinners and programs that bolster and encourage our Scottish Rite experience and brotherhood.

They have joined together with our Chairman in a great way, to establish a team concept and a value system that has and will, result in new lines of business, greater participation and encouraging all Scottish Rite Masons to become more involved in outreach, leadership and support to each Scottish Rite Mason and his family.

Lets look back at several months past where very special events occurred in our Stated Meetings and in the dinner programs:

October 20, 2016 was as always, a great time for personal reflection and an opportunity to participate in, and enjoy our symbolic Feast of Tishri.

We once again enjoyed a meal with brothers and friends, talking, reminiscing and meeting new acquaintances. Following Dinner, the auditorium was gaveled to order for the dinner program.

Venerable Master, Kevin M. Caraway introduced our Toastmasters for the Feast of Tishri.

Our Valley Chairman, Ill. Brother Kenneth C. Curry, 33rd introduced Pastor Katie Lewis, First United Methodist Church, our speaker of the evening. Pastor Lewis presented a parallel description of the Feast of Tishri and encouraged us to reflect on the biblical principals and tenants of the bible with emphasis on personal dedication and living a life with high moral turpitude and value.

November 17, 2016: Our November dinner program always has special meaning and purpose as we salute our Scottish Rite Military Veterans. To many, this recognition is the paramount feeling of pride and patriotism felt by those who have served our great United States of America and had the great honor to Salute the symbol of this great nation, the American Flag. As we remember our Veterans we always pause to remember those who paid the ultimate sacrifice for our nation and its causes around the world.

We saluted and we will continue to remember all Veterans. Not only those in our Scottish Rite family, but all those who voluntarily serve our nation on military duty around the world, our reservists and national guard, and those who are in harms way and those who support them. We openly pray for all of our military veterans and their families, as they serve and as their families wait for their loved ones to return home from duty.

The November month of remembrance for our Veterans is truly a special opportunity to reflect and remember the sacrifices that are made daily for our right to live free and our pursuit of the American way of life. May God bless our military Veterans and our great Nation.

The November 2016 dinner meeting was opened by Brother Ernest L. Runyon, 32nd KCCH, Commander of Kadosh and the Invocation was given by Brother Leonard H. Newman, Jr., 32 Degree, Chaplin, Council of Kadosh.

Our special speaker was introduced by Brother Michael E. White, 32nd Degree, Chairman, Program Committee. Brother White presented Mr. Fiske Hanley II to our dinner attendees and shared Mr. Hanley’s Military history to “whet” our passion and to listen and enjoy his experiences as a very young B-17 Flight Engineer and Prisoner of War (POW).
Mr. Hanley “sported” his World War II “tunic” (Uniform Jacket) and his “50 mission garrison cap he no doubt wore during his flight experience and incarceration as a POW in Japan.

Mr. Hanley shared stories of his flying experience and his time as a POW. His remembrance of those times were spectacular and were often “riveting “ as he shared great times and times of terror and fear. Mr. Hanley’s presentation was well received and all stood with loud applause for Mr. Hanley and for his presentation.

Our Chairman, ILL. Kenneth C. Curry, 33rd Degree, took opportunity to acknowledge Mr. Hanley’s service and to reiterate the value of service made by all Veterans and their families as we continue through difficult times abroad and at times at home.

January 19, 2017: This evening was a special opportunity to install our Lodge of Perfection, Chapter of Rose Croix, Council of Kadosh and Consistory Officers in our Scottish Rite Valley, our Thistle Officers and our Ladies Auxiliary Officers for 2017.

We shared a great dinner; the caterer provided a great buffet and all enjoyed visiting and reminiscing while dining.

Our Chairman then remarked and shared information regarding certain 2017 challenges and introduced some new policy and procedures that will enhance our ability and capabilities in the future. He commented on how the heads of the four bodies will be accepting additional accountability in a de-centralized management structure allowing our Valley leadership greater flexibility is accomplishing our Scottish Rite goals.

February 16, 2017: The highlight of the February 2017 Stated Meeting and dinner was the recognition of our highly exalted 50 Year Scottish Rite Masons.

There were 35 Scottish Rite Masons who were recognized in name during our dinner. There were four (4) of the named present to receive the coveted “Blue Cap” signifying the significance of their individual achievement.

As we all are aware, 50 years of specific involvement in any endeavor is very special and given the legacy and significance of this hallmark achievement, it is “grand”. It is not only “grand” to the recipient but is special and meaningful to each and all Scottish Rite Masons. Congratulations to all 35 recipients and to their wives and families who supported their membership for a half century of special endeavor.

Brother Jeffrey C. Billington, 32nd KCCH, led the Pledge of Allegiance and Brother Paul A. Solomon, 32nd KCCH, Prior, Consistory, provided the musical accompaniment for the singing of the National Anthem.

The dinner buffet was again well done by our caterer and all enjoyed the time to fellowship and dine with friends and new acquaintances.

Following the recognition ceremony, Brother Kenneth C. Curry stated his pleasure in the great milestone of endeavor by all Masons who reach the lofty goal of being a 50 year Scottish Rite Mason. He carefully reminded the dinner attendees of the effort and support given by the families of those recipients.

The Spring Reunion was fantastic!! Twenty-three attained the Rank of Master of the Royal Secret. We welcome these new Scottish Rite Masons.