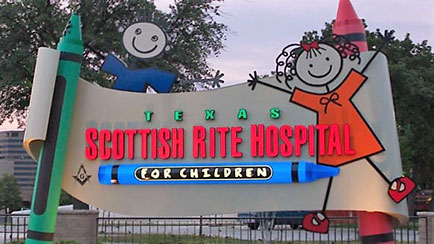 The February 25, 2017 Luncheon and Reception in Wichita Falls, Texas was a special opportunity for all in attendance.

Following introduction and recognition of attendees and guests, lunch was served buffet style by an excellent Wichita Falls caterer. Great food, fellowship and reunion opportunities were made and new friendships were initiated.

Our Texas Scottish Rite Hospital for Children (TSRHC) guest speaker, Brother Burrel Poston 33rd degree, presented the attendees with a heart pulling and eye wetting video production of a very special young man who was, and is, being treated by TSRHC. Brother Poston stated and reiterated the miraculous surgical and pediatric orthopedics management accomplished by the professional medical team and volunteers at TSRHC is the best in the United States and is recognized as such by medical professionals around the world.

Brother Poston also led in a discussion regarding how can Masons support the TSRHC and how to assist and direct families having children’s orthopedics needs to the TSRHC.

R.W. and Ill. Wiggins began his visit with those in attendance by clearly stating his objectives for the Orient of Texas, Scottish Rite Valleys. His presentation reflected his many decades of service to our Masonic family as a Blue Lodge Worshipful Master, District Deputy Grand Master, Most Worshipful Grand Master, Deputy and Chairman of the Dallas Valley.

We were reminded that our sole entrance into Scottish Rite Masonry comes directly through our Southern Jurisdiction Blue Lodges and he stated the importance of building lasting, long term relationships between Lodges and Valleys are the key to the member growth in and between those Lodges and Valleys.

We were also reminded that our Blue Lodges are the cornerstone of all things masonry and acknowledged Scottish Rite Masonry has been refered to as the masonic university or the pillars of masonic knowledge and education. As such, both need to work hand in hand, or arm in arm, to initiate greater numbers of eligible and capable new Blue Lodge and Scottish Rite Masons.

His presentation concluded with his thanks for our support and our willingness to work diligently to turn our membership towards a positive value and to work hard, educating and supporting our Texas Blue Lodges as they seek new members.

This great opportunity was threefold; first to receive an informative presentation from the TSRHC, then to meet, greet and reacquaint with our new Deputy of the Orient of Texas and finally, to plant the seed to reestablish a Scottish Rite Club in Wichita Falls, Texas.

All in all the luncheon and reception was a great success. There were approximately 35 in attendance and all stated the time was well spent and hoped for more opportunities to hear from the TSRHC and spend more time with our Deputy, R.W. and Ill. Michael L. Wiggins.

Again, we thank Maskat Shrine for allowing us to use their beautiful facility for the luncheon and reception. We look forward bringing our Lodge of Perfection to Wichita Falls and hope we might be welcomed to visit Maskat Shrine again.

Regarding Fort Worth Valley membership and degree presentation;